Looking Through the Lens of Hope 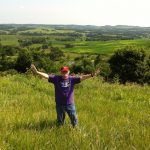 In 1990, I had just finished filming a five-part video project on the Age of Exploration for Encyclopedia Britannica. When I learned that the 10th annual National Alliance on Mental Illness (NAMI) convention would be held in Chicago, I grabbed a colleague and a camera, and, with NAMI’s permission, filmed several of the presentations. One was by Mary Ellen Copeland, Ph.D. That decision changed my life. From then on, I was looking through a lens of hope.

Trauma and the Brain
I’ve been behind a camera most of my life, and I graduated from UCLA with a Master of Fine Arts degree in 1968. My early years as a filmmaker were marked by the tragedies of the Robert Kennedy and Martin Luther King, Jr., assassinations and by the heady atmosphere of Los Angeles at the time. My contemporaries at UCLA included the singer/songwriter Jim Morrison and Gloria Katz, who wrote the screenplay for American Graffiti with William Huyck. By 1984, I would come to believe that filmmaker George Lucas was stealing my work. The thing about delusions is that when someone tries to talk you out of them, it can actually make them stronger.

Among other health challenges, I was diagnosed with temporal lobe epilepsy and became interested in learning more about the brain. I started reading the work of Bruce Perry, M.D. Dr. Perry talked about the impact of trauma on a child’s developing brain. It was breathtaking news that experiences could actually change the chemical structure of the brain.

That brings me to the NAMI conference. I chose three sessions to film. One was about how home movies could help predict the later development of schizophrenia. One was by the chair of psychiatry of Rush University who spoke to about 40 people in a room that was built to hold 300. The third was by Mary Ellen. She spoke in a converted hotel suite with not an empty space to be had. If the fire marshal had seen us, he would have closed it down.

Capturing the Beginnings of WRAP
Looking back, I think I chose to film Mary Ellen, in part, because her story had key elements that I knew would be important to a lot of people. She had received a psychiatric diagnosis. Her mother had been hospitalized for several years when she was growing up. She also experienced trauma as a child. But there she was, smiling and enchanting the audience (who were there to hear about depression) with talk of affirmations and light diet and exercise. She was speaking about coping skills and about staying well, too. She had a story to tell that I knew others would need and want to hear.

I filmed her at the NAMI conference and then spent a week with her in Brattleboro, Vermont. We filmed research psychiatrist and her landlord, Dr. Wayne London; her mother; her daughter, Patti; her pharmacist; her bodyworker; and Joyce Burland, Ph.D., who became head of education for NAMI. We went back to Chicago to film transitions and the opening sequence. The resulting film, Coping with Depression, tells Mary Ellen’s story through family photos and interviews and demonstrates her journey from a life struggling with mental health challenges to a life of wellness and recovery. It’s a compelling and intimate look at the work that led to WRAP as we know it today.

So compelling, in fact, that the next year I piled into my van with my wife and my 1- and 3-year-old children, a camera, a recording deck, and lights and headed to the NAMI convention in San Francisco to help sell the film. When Mary Ellen wrote The Depression Workbook, her publisher picked up the film and distributed it for us. It was the first-ever first-person documentary that talked about wellness as an expectation for people with mental health challenges.

With Hope, Everything Is Possible
I moved on and lost touch with Mary Ellen for many years. I experienced several changes in my own life, including a divorce. By then, WRAP had become a worldwide phenomenon.

About six years ago, I called Mary Ellen and suggested we update the depression video. She thought about it and decided to remake it instead. I didn’t know much about WRAP, so I interviewed her, and we ended up with a two-part DVD called Living WRAP. In Part 1, Mary Ellen takes us step by step through the key concepts of WRAP, facilitates a WRAP group, and shows us some of her wellness tools. Part 2 contains some footage of the original film.

By now, I knew I wanted more WRAP in my life. I was working as a recovery advocate at a local hospital one day a week. But sometimes I had fewer than five minutes with patients to, as I wrote in my case notes, “normalize” their experience. I found I had a real skill at dealing with patients. I used music videos on the geriatric floor, and we all were dancing. But Mary Ellen had made me aware that I could do more, and I wanted to become a WRAP facilitator.

I attended a WRAP facilitator training in Oakland, California, in 2013. It was a magical experience for me. One of my nine classmates came from the small town in Iowa that I grew up in. I was delighted because crossing paths with anyone from my home town was so unlikely. Since then, I have facilitated eleven WRAP trainings in Illinois, and the power of these sessions never ceases to amaze me.

I tell people we’re going to talk about their own wellness, and you can see a lightbulb turn on in their minds. Some say, “I don’t know what that is. It sounds impossible for me.” At graduation, a woman who was quiet during the entire training came up to me and told me I had changed her life. That’s powerful.

I know how powerful WRAP can be. Because of WRAP, I understand that I am a whole person. I accept parts of my life I didn’t appreciate or was ashamed of. Because of WRAP, my focus is on my wellness and on working with others to achieve what I have.

Was it a coincidence that I connected with Mary Ellen all those years ago? I don’t know for sure, but I don’t think so. What I do know is that whether I’m facilitating a WRAP group or speaking in hospitals, to medical students, or to occupational therapists, the message is simple. All I’m “selling” is hope. But when you have hope, and you spread hope, everything else is possible.