Could it Have Been Different?

I first became aware of “mental illness” when I was eight years old. My mother began spending all of her time sitting in a rocking chair-rocking, crying, very frightened and unbearably sad. No one asked her why she was crying. No one took the time to sit with her and hold her hand. Instead they took her away to a mental institution. That’s where she spent the next eight years of her life. This brilliant woman with a degree in nutrition, ahead of her time in her understanding of the effects of food on the body, deeply caring and compassionate, was treated with 150 electric shock treatments interspersed with various experimental drugs available at the time to stop her sadness. She spent her days behind a series of thick locked doors, sharing a sleeping and living space with 50 other women, in a dark, smelly ward with no privacy-50 beds in one room with only the space for a small night stand between. They wondered why she didn’t get better, why she kept crying. Instead she got worse. Instead of just crying, she started wringing her hands, walking in circles repeating over and over, “I want to die.” Several times she tried to kill herself. Sometimes she was very different. She would be racing all over the place, laughing hysterically, behaving in a bizarre manner that made us even more frightened than we were when she was depressed.

I know this because every Saturday morning for eight years, I went with my three brothers and sister to visit her. It was a truly frightening experience. This was not the person we had remembered as our mother. They told us she was incurably mentally ill. They told us not to bother to come and see her anymore. But we did. She still remembers that the next time we came to see her after they told us not to come and see her anymore, we brought her a big bouquet of gladiolas.
Something strange happened. A volunteer noticed she wasn’t having these episodes anymore. She was even helping to take care of the other patients. She still wonders if it had anything to do with that volunteer who sat with her for hours and listened to her, even took her for some rides. She says she kept apologizing for going on so, but the volunteer said to go right ahead. So she kept talking. She talked and talked and talked. Then she got herself discharged.
This incurably mentally ill woman came home to her family, got a job working as a dietitian in the public schools, kept that job for twenty years while keeping up with the activities of her ever growing family of children, grandchildren, and great grandchildren. She’s now 82 years old. Thirty-eight years ago she got out of the “hospital”. On many days I feel as if she has more energy and enthusiasm for life than I do. She’s never taken any psychiatric drugs. Incurably mentally ill?
She will never remember what it was like when we were little. Her memory of those years was wiped out by electro shock. She lost 8 precious years of her life and had to overcome the stigma faced by any person who has spent time in a mental institution.
Sometimes I fantasize about my mother’s life. How might this story have been different? Suppose when Mom said that she wanted a part time job-just before this sadness and crying started -Dad had said, 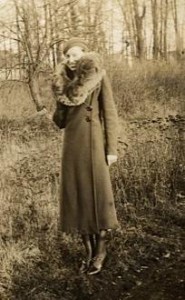 “Sure Kate, what can I do to help?” Suppose her women friends and her lovely Pennsylvania Dutch family had gathered around, listening for hours on end, holding her hand, empathizing with her, crying with her-then what would have happened? Suppose they had offered to take the kids for a day or two, or a week, or a month so she could do some nice things for herself. Suppose they had offered her a two week cruise in the Caribbean. A daily massage. Suppose they had taken her out to dinner and a good movie, a play or a concert. Suppose someone had told her to get out and kick up her heels, to read a good book, go to a lecture on the importance of good nutrition. Suppose, suppose, suppose……..
Maybe I would have had a mother when I was growing up. That would have been nice. My brothers and sisters would have liked one too. I’m sure my Dad would have liked to have a wife and my grandmother would have liked to have her daughter in her life. Most important, my mother would have had herself, with all her memories intact.
Suppose, 20 years ago, instead of going to the psychiatrist to be told that mental illness is hereditary and I have the same disease as my mother, I had searched out my friends to hold me and listen while I cried and laughed. Suppose my husband had said, “Don’t worry, Mary Ellen, I can handle things. Just take a break. You deserve it.” Suppose the family had pooled their resources and sent me on a hiking trip to the White Mountains or encouraged me to take some much coveted courses, or taken me out to lunch and for a bike ride, or to pick flowers, or brought me a kitten. Suppose the house had been decorated with beautiful flowers. Suppose I had had my own little space to go to whenever I wanted and do what I needed to do for myself. Suppose I had known that I had some value and could do for myself whatever it was I needed to make myself feel better. Go to every movie playing for a month. Whatever. Just suppose.
Maybe I wouldn’t have spent too much of my life in mental institutions looking for ever elusive answers to my pain, too many years with my brain in a drugged fog, too many years of deep sadness and suicidal ideation interspersed with periods of outlandish behavior. It has taken me years to undo the damage. Maybe there would be no tremor in my hands, maybe some of the relationships that ended for me during those hard years would still be part of my life. Maybe my career and reputation would have remained intact instead of having to start all over again at 50.
Through all those foggy years something was stirring in me. Something that knew somehow that all of this was not right. Something that caused me to ask my psychiatrist how people deal with these illnesses on a day to day basis. He said he would get me that information. (Finally a promise of some useful help) When I returned the next week in great anticipation he told me no such information had ever been gathered. The only information he could give me was on psychiatric treatment, medication and restraint. From someplace deep inside me a voice kept saying “this is not right”. The voice got louder and louder.
For the last four years I have dedicated my life to finding out how other people cope, and the more I learned, and put this learning into practice in my own life, the better I felt. I learned that there is a silent but very courageous group of people all over the country who, like me, have been told that they are incurably mentally ill. These people have not given up. They have found the way out of the maze and I have become the vehicle for getting their important messages out to the rest of the world. I gather the information and spread it as far and wide as it needs to go. Through seminars, lectures, books, videos and grass roots networking
This is the most important thing that I have learned: people being there for people creates more wellness and more recovery than anything else. The next time you start feeling low (or high or strange), reach out. If someone you love is having “psychiatric symptoms”, sit with them, listen to them, let them cry, scream, shout, swear. Don’t judge them. Don’t criticize them. Hold the advice. Just be there. Bring them good food or flowers. Take them away to a place of beauty where they can rebuild their strength. Do for them what you would like to have done for you.

Mary Ellen Copeland, PhD, developed Wellness Recovery Action Plan (WRAP) with a group of people with lived experience who were attending a mental health recovery workshop in 1997. She is the original author of the WRAP Red Book, as well as dozens of other WRAP books and materials. She has dedicated the last 30 years of her life to learning from people who have mental health issues; discovering the simple, safe, non-invasive ways they get well, stay well, and move forward in their lives; and then sharing what she has learned with others through keynote addresses, trainings, and the development of books, curriculums, and other resources. Now that she is retired, and that, as she intended, others are continuing to share what she has learned, she continues to learn from those who have mental health issues and those who support them. She is a frequent contributor to this site.